A History of St. Mary’s Church

The early church on this site dating from the 12th century had the massive buttresses one sees today supporting the tower. Judging by the eight blocked up windows, now visible only from inside the bell-ringing chamber, the top of the tower would be just below the present belfry.  Without the increased height and decoration given to it in the late 1300s and early 1400s the tower would have been fortress-like or squat in appearance.

The roof line of the nave of the early church is still visible on the east-facing wall of the tower above the great arch which divides the nave from the west end.  It had a steeply-pitched roof and the aisles to north and south would have been narrow and low.  Their line is also visible on the walls of the tower inside the church. By standing in the nave and looking west towards the font the outline of the original church becomes clear.

Before the great rebuilding began an addition to the north-east corner of the church had been made in the 1340s when a chapel was built beside the chancel. The north wall of the chancel now became an inner wall but one can still see evidence of its time as an outer wall by looking at the tall lancet window just left of the altar and the outline of another lancet window where now a wide arch, broken into the old outer wall, opens up into the chapel. The tiny doorway from the chancel to the chapel suggests that there was a priests’ vestry on the north side of the chancel before the chapel was added.

Founded by Amicia, wife of Adam de Herthill of Tickhill, the chapel was associated with a school and by 1348 with the chantry of St Helen. Its windows on the north side have distinctive tracery; the one nearer the altar is reticulated and the other .has a geometrical design. These styles were popular in the ear]y 1300s and they represent in this Church the only examples of the decorated style.  Known as St Helen’s chapel, later as Eastfield chapel, it had by the 18th century become so associated with the Laughtons living at Eastfield that it became known as the Laughton Chapel.  It was rededicated to St Helen after renovation in 1996.

The chapel retained its pitched roof until the early 19th century. Drawings of the church by John Buckler in July 1813 show the ‘Laughton’ Chapel without the crenellations of the rest of the church.  By 1826 it had been given them to match the south-east chapel and its roof had become a sloping or ‘shed’ roof to bring it into line with the aisles and the chancel.

The rebuilt and enlarged Church

The present Church is the result of extensive rebuilding over a long period. As the arms of Castile and Leon appear on the outside of the tower an association with John of Gaunt can be assumed.  He held the castle and bad claims on Castile and Leon.  The period 1373 to 1399 for this part of the rebuilding seems likely. Other shields on the exterior around the west door below the tower confirm this; that of William Eastfield who died in 1386 and of John Sandford who lived here in 1394.

A bequest too points to the late 14th century as a period of rebuilding when Richard Raynerson in 1390 left 100/- to the works of the Church of Tickhill. By 1429 however the building was not finished for a John Sandford bequeathed 100/-, a cart and four horses ‘to the makying of the stepell of Tyckhill’.  The changes effected between about 1370 and 1440 were dramatic. The great west window was made above the west door between the great tower buttresses, the aisles were made wider and given larger windows, those on the south side being especially wide.  A window was placed over the chancel arch and a new, larger window was made above the altar at the east end of the chancel.  The pillars and arches of the nave were remodelled and given decorated capitals and finished with an ogee and finial design. Above these arcades a generously-proportioned clerestory was built with eight windows to north and south and with a spiral staircase leading from the outside of the south aisle roof to the nave roof. Porches were added to the north and south doors. The latter was more spacious than the former suggesting that the south approach to the Church was the main one from a settlement whose centre was still nearer the castle than the market place.

Windows at the top of the tower were blocked up and, on the outside, in the wall space thus provided, canopied niches were let into the walls and statues were placed in them.

A belfry stage with eight new louvre windows, two to each side, was completed and the spiral staircase was taken to a new tower top which was crowned with a parapet and pinnacles.

A decorative feature of the rebuilding was the use of a quatrefoil design found on the tomb of William de Estfeld in the north-west corner, on the tower in a frieze above the niches, on the porches and on the buttresses of the north and south aisles.  Significantly it is not to be found inside or on the buttresses outside of the St Helen or ‘Laughton’ chapel because this predates the rebuilding.  Here the decoration is of a trefoil design.

The view of the east end of the Church from the outside gives the clearest impression of how the Church developed for although the crenellation along the roof-line and the pinnacles give an idea of unity nevertheless the masonry and buttress arrangements show that the sequence of building was, firstly the east end of the chancel, secondly the St Helen or ‘Laughton’ Chapel and then the south-east corner chapel area or sacrarium as it was sometimes called. 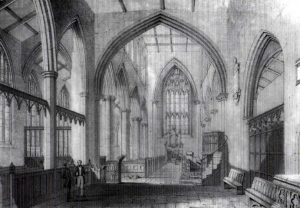 Interior of the Church in 1849

Interior of the Church in 1849 from a lithograph.  It shows the underdrawn roof built in 1826, the organ at the west end, the Estfeld tomb in the chancel and the open aspect of the south side before the organ, choir stalls and a vestry were placed there.

An extract from “Portrait of an English Parish Church” The Blessed Virgin Mary Tickhill, Yorkshire By Tom W Beastall MA