St. Mary’s church has housed the Fitzwilliam Tomb for more than 450 years.  According to tradition, the tomb came into St. Mary’s from Tickhill Friary in 1538, during the Dissolution.  The figures on the tomb chest are Sir Thomas Fitzwilliam and his wife Lady Lucy Neville.  It is possibly the earliest Italianate alabaster tomb in the country, and would originally had been highly painted.

According to the inscription on the tomb, it commemorates Sir Richard Fitzwilliam, his wife Lady Elizabeth Clarell, their son, Sir Thomas Fitzwilliam, and his wife, Lady Lucy Neville.  Lucy was the daughter of the Marquis of Montacute and cousin to Edward IV, Richard III and his Queen, Anne Neville.  She was also a niece of Warwick the Kingmaker.

The tomb was originally sited in the south-east corner of the church but, in the mid-1800s, was moved to the north-west corner behind high railings.  It was incomplete and had suffered badly from damp, as well as the destruction thought to have occurred during the Civil War.

As part of a programme of restoration work begun in 2012, the tomb was to be dismantled, the panels conserved and the tomb rebuilt.  As work progressed it was clear that the restored tomb would need to be re-sited in a more suitable position and, following discussion with experts, its current site was chosen.

A major surprise during the work was the discovery of human remains in the tomb core.  There was a further surprise when the osteoarchaeologists established that the bones were of four individuals, packed tightly together.  These were removed for cleaning and initial investigation, and the osteoarchaeolosist’s findings, alongside historical records, all add to the story of the tomb chest.

The tomb contained the bones of four adults, two male and two female.  We know from family wills that Sir Richard, his wife Elizabeth Clarell, and their son Thoma, were all buried in Tickhill Friary before 1505.  After Thomas’ death Lucy remarried and died in about 1534.  When the friary was dissolved in late 1538 any family remains not rescued would have been lost.

John Leland, who visited St. Mary’s in 1540, recorded that “the grauntfather and father to my Lorde Privy Seal” previously buried in the Friary were now in the parish church.  “My Lorde Privy Seal” was William Fitzwilliam, the son of Thomas and Lucy, and a companion of Henry VIII.  Lucy’s son from her second marriage was Sir Anthony Browne, the King’s Master of Horse, who commissioned the remarkably similar, well preserved tomb at Battle, near Hastings in Sussex.  Lucy and her son were all wealthy and influential people.  It seems likely that Lucy’s sons were able to secure the removal of their family remains from the Friary before the dissolution, and arrange for our beautiful and very costly tomb to be built to house the family bones in St. Mary’s church.

The tomb core was rebuilt and the bones re interred in November 2013.  In March 2014 the skillfully restored alabaster panels were replaced.  The missing sections of the cornice were replaced in new alabaster, beautifully carved. 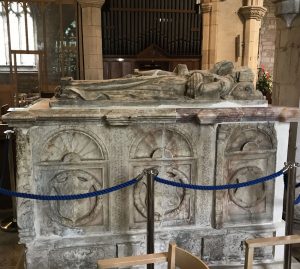