The Terrible Tale of William Oddy

This tale was told by Mr Hartshorn, a Tickhill farmer, in the 1960s.  He had been told the story by his Grandmother, and the story was later confirmed by his daughter to Tom Beastall in 1985.

The story is set on Oddy Lane, near the site of Tickhill station, in the late seventeenth century, long before the railway was built.  It concerns the ruins of the ancient church of All Hallows, on the hill outside Tickhill.

William Oddy was a Tickhill farmer.  Late one night, in 1670, he was driving his wagon heavily laden with stone taken (probably illicitly), from the site of the old All Hallows church, along the narrow lane towards home.  His cart was overturned and crushed him when his horses bolted.  It was said locally that they had been startled by an appearance of The Devil!

According to our church register, William Oddy died in 1670. We know that the old church had by that time fallen into disuse. There are few records of the building’s decline, but during the survey of 1988 it became clear that the site had actually been cleared and little scattered stone left apart from the footings.

However, Tom Beastall records a note from 1726 in St. Mary’s church  safe which describes the casting of six new church bells in the castle yard using the metal from four old bells from St Mary’s and “three old bells that were taken down from All Hallows Church about fifty years since”.  This puts the story of William Oddy into a new light.  There could well have been stone left  to clear that night, and who knows what happened next?

At the very least, William’s escapade gave the name to Oddy Wood and Oddy Lane on the way from Tickhill to Wadworth. 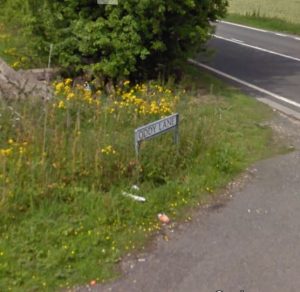